It is a guarantee that don’t like someone on your development team and they have behaviors or habits that you might find objectionable:

But as irritating as you find your co-workers, odds are:

You do something that they find annoying…

Annoyances and poor communication can lead to conflicts that range from avoidance to all out war where people get drawn into taking sides.  But consider the cost of team conflict :

The table above is only showing the average result of conflict, some of us have been in situations that get much, much worse.

Software development is not a popularity contest, you don’t have to like everyone that you work with.  However, if you allow your feelings of annoyance escalate into conflict then there is a real cost to your project and ultimately in your stress levels.

All conflicts start with disagreements.  The Communications Catalyst2 talks about the following cycle: 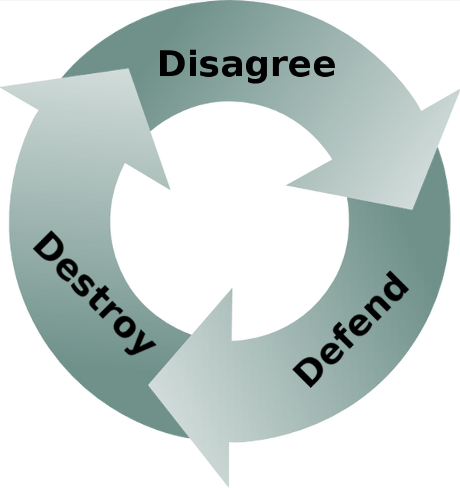 When you disagree with your coworkers then they don’t feel listened to.  They will then defend their position by digging in their heels, then you will dig in your heels and the road to destruction starts. If there are any annoying habits present then the conflict will escalate quickly.

If things get out of hand then people start taking sides and productivity takes a major hit. In the worst conflicts this leads to loss of key personnel, which has been measured to be:

Losing key personnel who have comprehensive knowledge of business rules and organizational practices tied up in their heads often causes projects to face fault and come to a stand still.

You may feel justified in starting a conflict or escalating one, however, as clever as you think you are, conflict hurts everyone — yourself included.  Just remember:

It is virtually impossible to start a conflict that doesn’t boomerang back and bite you in the @ss!

4 Ways to Avoid or Reduce Conflicts

Things to consider to avoid conflict:

Managers should be on the lookout for the signs of conflict and clear them up while they are still small.  Most conflicts arise from simple misunderstandings.

You will notice that most organizations will promote people based on their ability to work with others and resolve conflicts over competence.

My best friend also works in the tech sector, and despite being friends for almost 25 years we have very few beliefs or habits in common.  There are subjects that we agree on, but then we don’t agree on how they should be handled.  We virtually never take the same action under the same conditions.

The key to all working relationships especially when the other person is very different from you is respect.